Home » Press centre » ECLAC Calls for Articulating Social Protection Systems with Disaster Risk Management Policies in Pursuit of a Transformative Recovery with Equality and Sustainability in the Region
Available in: EnglishEspañol

The United Nations regional organization presented a document on this issue in the framework of the Fourth Session of the Regional Conference on Social Development in Latin America and the Caribbean, which is taking place virtually on October 26-28.
25 October 2021 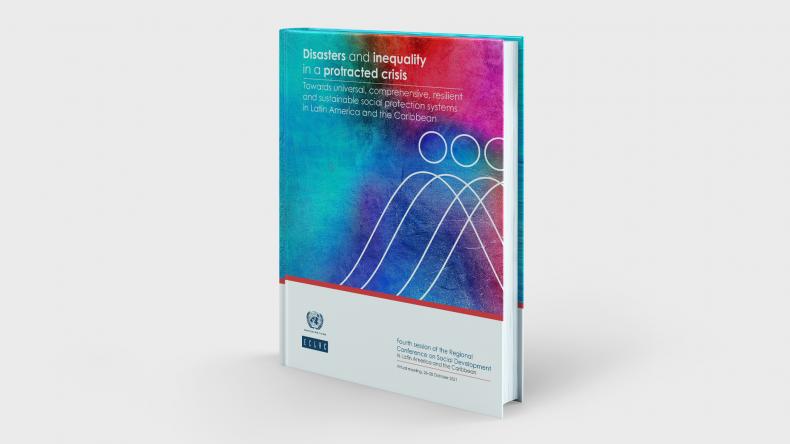 The crisis prompted by the COVID-19 pandemic and the increased frequency and intensity of disasters in Latin America and the Caribbean show the need to strengthen the links between social protection systems and disaster risk management policies in the region’s countries, with the aim of achieving greater social and institutional resilience and moving towards a transformative recovery with equality and sustainability, according to a new report presented today by ECLAC’s Executive Secretary, Alicia Bárcena, in the framework of the Fourth Session of the Regional Conference on Social Development in Latin America and the Caribbean, which was inaugurated this Tuesday.

The virtual event – organized by the Economic Commission for Latin America and the Caribbean (ECLAC), the Government of Antigua and Barbuda, and the United Nations Development Programme (UNDP) – brings together ministers and high-level authorities from governments’ social entities, UN officials, representatives of international organizations, members of civil society and academics.

Latin America and the Caribbean, the developing region that has been most affected by the pandemic, is living through a critical time of great uncertainty due to the protracted nature of the crisis, in a context of growing global asymmetries between developed countries and developing nations both in terms of access to vaccines and financing as well as concentration of wealth, income and technology, ECLAC sustains.

Although the region is home to 8.4% of the global population, it accounts for 18.5% of COVID-19 infections and 30.3% of related deaths. In socioeconomic terms, the plunge in regional GDP in 2020 (-6.8%) led to 22 million more people living in poverty (for a total of 209 million, or 33.7% of Latin America’s population) and to an increase in inequality, with the Gini coefficient rising 2.9%. This situation was accompanied by a rise in unemployment, particularly among women; the loss of educational processes; digital exclusion; and an increase in care work, among other factors.

The pandemic has intensified the region’s structural problems – which include low productivity and high informality, inequality and poverty – which are compounded by emerging critical constraints such as migration, the digital divide and climate change along with the impacts of disasters, which are increasingly recurrent and varied in nature and origin, according to the document Disasters and inequality in a protracted crisis: Towards universal, comprehensive, resilient and sustainable social protection systems in Latin America and the Caribbean.

The region’s countries reacted to the impacts of the pandemic, ECLAC explains, but their social protection systems were not prepared to address a health and social crisis of the magnitude of what occurred, particularly with regard to responding to the needs of traditionally excluded population groups, such as informal workers, the regional organization warns.

Between March 1, 2020 and June 30, 2021, the 33 countries of Latin America and the Caribbean had announced 430 emergency non-contributory social protection measures to guarantee income, food security and access to basic services for households in situations of poverty and vulnerability, as well as to reduce their expenses. Of this total, 218 were adopted in South America, 109 in English-speaking Caribbean countries and 103 in the group made up of Central America, Mexico, Cuba, Haiti and the Dominican Republic.

In total, it is estimated that between March 2020 and June 2021, this coverage reached 105 million households, comprising 395 million people (on average, 59.6% of the population of the region’s countries). The challenge today – ECLAC stresses – is to sustain the emergency measures and expansion of social protection in an unfavorable fiscal context.

Before the pandemic, in 2019, Latin America already had public debt levels (for the central government) of 45.6% of GDP, a figure that rose to 55.3% of GDP by June 2021. This is equivalent to an average increase of 9.7 percentage points of GDP. The situation is more complex for the Caribbean since it has higher public debt levels than Latin America, exceeding 100% of GDP as of March 2021 in the case of four countries.

In addition to suffering the effects of the pandemic, the Caribbean is particularly exposed to climate change-related threats. In the 2000-2019 period, nine of the ten countries or territories in the world that experienced the worst effects of disasters as expressed in a drop in GDP belonged to the Caribbean subregion.

The establishment of universal, comprehensive, sustainable and resilient social protection systems, articulated with policies for disaster reduction – as this new report by ECLAC contends – produces positive social and economic effects by strengthening institutional and social resilience and facilitating a preventive approach throughout the disaster cycle to produce a convergent spiral aimed at reducing the aggregate costs over time. This proposal follows the pillars and lines of action set forth in the Regional Agenda for Inclusive Social Development (RAISD), approved in October 2019 in Mexico in the framework of the Third Session of the Regional Conference on Social Development.

“Latin America and the Caribbean needs new social and fiscal compacts to strengthen social cohesion and achieve the financial sustainability of social protection. Regional cooperation, solidarity among nations and multilateralism are key to emerging from this crisis and better confronting the diverse disasters that affect the region,” indicated Alicia Bárcena, ECLAC’s Executive Secretary, highlighting the recent creation of the CELAC Comprehensive Disaster Response Fund – the operations of which will be supported by the Commission – and urging the international community to support initiatives such as the Fund to Alleviate COVID-19 Economics (FACE), proposed by the Government of Costa Rica, along with the Caribbean Resilience Fund, conceived by ECLAC to provide the subregion with liquidity while also attracting financing for climate change adaptation and mitigation.

Website of the Fourth session of the Regional Conference on Social Development in Latin America and the Caribbean.

Disasters and inequality in a protracted crisis: Towards universal, comprehensive, resilient and sustainable social protection systems in Latin America and the Caribbean