Home » Press centre » Countries Confirmed their Commitment to the Regional Agenda for Inclusive Social Development for Tackling the Current Crisis and Moving Towards a Transformative Recovery with Equality at the Center
Available in: EnglishEspañol 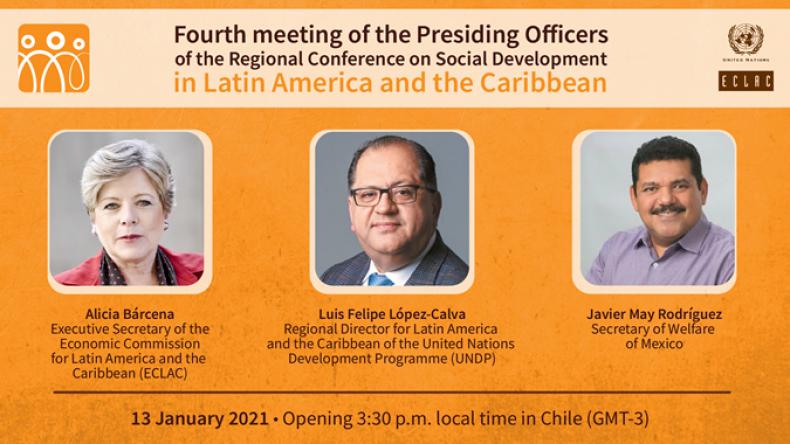 The Regional Agenda for Inclusive Social Development (RAISD) – approved in 2019 and the axes of which have become a priority during the COVID-19 crisis – can contribute to tackling the current emergency as well as to moving towards a transformative recovery with equality at the center, as Latin American and Caribbean countries exchange experiences and engage in solidarity-based cooperation among themselves, authorities and officials asserted on Wednesday, 13 January, during the Fourth Meeting of the Presiding Officers of the Regional Conference on Social Development in Latin America and the Caribbean.

“Inequality defines our region. The measures implemented by governments allowed for partially mitigating the social impact of the COVID-19 crisis. Social protection systems have a central role to play at this historic juncture,” said Alicia Bárcena, who stressed that in order to connect the emergency to the recovery, it is necessary to put emphasis on vaccinating the entire population, on expansionary fiscal and monetary policies, on creating jobs oriented towards environmental sustainability, and on expanding regional integration and cooperation.

Meanwhile, Luis Felipe López-Calva, from UNDP, stated that “the path to recovery from the COVID-19 crisis in Latin America and the Caribbean will depend on the institutional capacity to acquire and administer vaccines, on having quality fiscal management, on having access to financing and on being able to establish elements for effective governance. The challenge is huge.”

“This meeting gives us the opportunity to join forces and boost synergies among the different actors who work on behalf of implementing the Regional Agenda for Inclusive Social Development, with an approach centered on the human dimension and which fosters South-South cooperation. We are calling for prompt consolidation of the 2021 work plan, through which we can obtain solutions on the Regional Agenda’s axes. We are convinced of the importance of continuing to work on designing a new generation of social policies that are more cross-cutting, universal and sustainable,” said Javier May Rodríguez, Secretary of Welfare of Mexico.

After the opening session, ECLAC’s Executive Secretary made a presentation entitled “Social Challenges and the Agenda for Inclusive Social Development in the Time of COVID-19” in which she explained that in 2020, the region’s countries took 263 emergency social protection measures to confront the pandemic, allowing them to partially mitigate the social impact of the crisis.

The cash and in-kind transfers made by countries, which can be found at ECLAC’s COVID-19 Observatory in Latin America and the Caribbean, covered about half of the regional population, with a cost equivalent to two times the annual spending on programs for conditional transfers and social pensions, Bárcena specified.

The Regional Agenda for Inclusive Social Development, approved in October 2019 in Mexico in the framework of the Third Regional Conference on Social Development, is a technical and political instrument that promotes implementation of the social dimension of the 2030 Agenda for Sustainable Development in Latin America and the Caribbean. It includes 56 lines of action organized around four axes: 1) universal and comprehensive social protection systems; 2) policies for social and labor inclusion; 3) a strengthened social institutional framework; and 4) regional cooperation and integration.

“We want to move towards a welfare State that would guarantee rights and build capacities. The 2030 Agenda and the RAISD are more valid than ever, but they face enormous challenges,” Bárcena said. “We need to build consensus for universal, redistributive and solidarity-based policies. No progress will be possible without fiscal and social compacts that enable cohesion and strengthen democracy, with participation and a real sense of belonging for all,” she concluded.

During the meeting, participating countries approved the proposed work plan for implementation of the RAISD, discussions on which will continue at the Fourth Meeting of the Conference, which will be held virtually in November 2021 with the Government of Antigua and Barbuda hosting and where the depth of COVID-19’s effects on the population will be examined.

The Fourth Meeting of the Presiding Officers was held in the framework of the XII Ministerial Forum for Development in Latin America and the Caribbean, organized by UNDP, the Government of Colombia and ECLAC and taking place on January 12-14.